Microsurgical repair is a time-housed means of securing an aneurysm and has a safety record similar to endovascular treatment in expert hands and for appropriately selected cases. Some aneurysms will still be treated most simply and effectively by direct surgery. At our unit each case is discussed by a multidisciplinary team consisting of a specialist neurovascular surgeon and interventional Neuroradiologist before recommending a treatment plan.

In appropriately selected cases microsurgical repair has the lowest likelihood of aneurysm recurrence and for needing retreatment of the techniques currently available. It lends itself to the definitive treatment of aneurysms with broad necks or complex shapes.

It may be appropriate that you meet both neuroradiologist and neurosurgeon to discuss the pros and cons of each approach and have your questions answered. The details of your operation will be discussed with you in detail by your surgeon and the risks specific to your operation explained. We will endeavour to answer any questions you have and encourage you to ask them.
‍

A craniotomy is a door which is fashioned in the skull bone to allow access to the brain. At the end of the procedure this bone is replaced and the wound closed to look natural again. A range of incisions are used and tailored to the needs of the individual case. The access is freuqently of a keyhole type and designed to disturb the brain itself as little as possible. It is also important to make the scar as cosmetically satisfactory as possible. In most cases it will be near invisible to someone not already alert to its presence.

The surgery is carried out under general anesthesia to provide the controlled operating conditions necessary for operating on such delicate structures. The anaesthetist plays a crucial role in enabling the surgery to be safely conducted and also sees the patient can wake comfortably afterwards.

The aneurysm is secured by placing a metal clip around its base. This permanently prevents blood from entering the aneurysm and removes the risk of bleeding. Modern clips are non-magnetic and come in a range of shapes and sizes to allow complex reconstructions of the blood vessels. They do not have to prevent future MRI scans and will not lead to difficulty when passing through airports.`
‍

Many aneurysms can now be approached though very small incision utilising a "keyhole' approach. This is made possible by advanced visualisation technologies that allow circumferential inspection of the aneurysms within a very confined space while retaining the capacity to control bleeding and manage a complication should that occur.

It is now possible to introduce cameras that allow the surgeon to look at multiple perspectives without having to retract the brain. An injection of dye into a vein (indocyanine videoangiography) allows flow in the blood vessels within the brain to be seen preventing inadvertent occlusions that might cause stroke. Augmented reality technology allows the injection of digitally processed angiographic images into the surgeons eyepieces.
‍

Occasionally it is not possible to reconstruct an aneurysmal blood vessel by surgical or endovascular means. To secure the aneurysm requires that the vessel be closed permanently. It may be that other blood vessels can assume the responsibilities of this vessel (collateral circulation) but in the event that it is not capable, stroke will result from the vessel's closure. It is possible to surgically reconstruct or create a new circulation to replace that which is removed.

Broadly speaking there are four strategies deployed. The first, rarely applicable is to excise the aneurysm while reconstructing its wall using tiny stitches- primary repair. 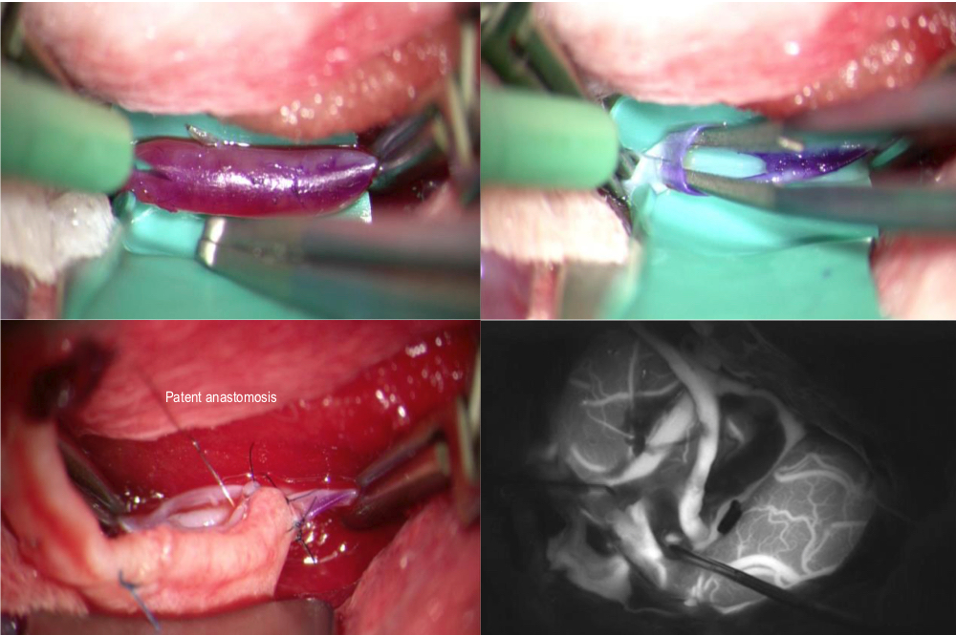 An EC-IC bypass can also be constructed using a conduit to connect arteries in the neck to blood vessels within the brain. Veins from the leg or the radial artery retrieved from the forearm provide such conduits. This type of bypass provides a higher blood flow than might be possible from the scalp vessels.

This type of surgery is complex and rarely required, usually to treat giant (>25mm) aneurysms or fusiform aneurysms. Revascularisation techniques are also used to treat conditions that impair blood flow to areas of the brain, in particular MoyaMoya disease and similar conditions. It is rarely indicated for narrowing caused by hardening of the arteries (atherosclerosis) resulting in reduced blood flow producing transient ischaemic symptoms or stroke. It may also be used when a tumour has so encased a blood vessel its removal is required along with the growth around it.
‍

Although the small risk to life and risk of stroke are shared between surgical and endovascular treatments, each technique also has risks peculiar to it. In the case of surgery there are complications related to the access needed to treat the aneurysm and include: