When an Aneurysm Bleeds

When an aneurysm ruptures, blood leaks into the fluid which circulates around the brain, the cerebrospinal fluid or CSF. This fluid is normally contained around the substance of the brain by a thin layer of tissue that resembles a spider-web. This web-like tissue is termed the arachnoid layer. This pattern of bleeding is therefore referred to as subarachnoid haemorrhage

Rupture of an aneurysm typically happens without warning. Most people who suffer one had no idea the aneurysm was present and there was no warning or precipitant. 80% of patients describe "the worst headache of my life". This is termed the ictal headache. This may be accompanied by nausea, vomitting or alteration in conciousness. Most people developing a rupture are not engaged in strenuous activity at the time.

A minority of people report headaches that precede the headache that brings them to medical attention by days and weeks. It has been suggested such headaches reflect changes that foreshadow the aneurysms rupture. The occurence of such sentinel headaches has been reported in 10 to 45% of those presenting to hospital with subarachnoid haemorrhage. However benign headaches are much more common than brain aneurysm rupture and it is very difficult to be certain in retrospect such headaches were truly indicative of an impending aneurysm rupture.

Focal neurological symptoms (stroke like symptoms) in the absence of headache is a very rare presentation of aneurysm rupture. It is most commonly associated with enlargement of aneurysms adjacent to sensitive structures or in very large aneurysms before they rupture. It is considered in the section covering other symptomatic aneurysms.

"Rupture of a brain aneurysm is a medical emergency."

Aneurysmal subarachnoid haemorrhage is a medical emergency and suggestive symptoms should prompt urgent investigation. The nearest emergency department is the appropriate first call. MRI can demonstrate blood staining of the brain tissue but it is not as specific for an aneurysmal origin.>Modern CT scanners can generate very detailed pictures of the blood vessels within the brain. This is called CT Angiography (CTA)and in most cases will demonstrate an aneurysm. It may even provide sufficent information to allow treatment to be planned and carried out. Some hospitals may prefer to make use of Magnetic Resonance Angiography (MRA). 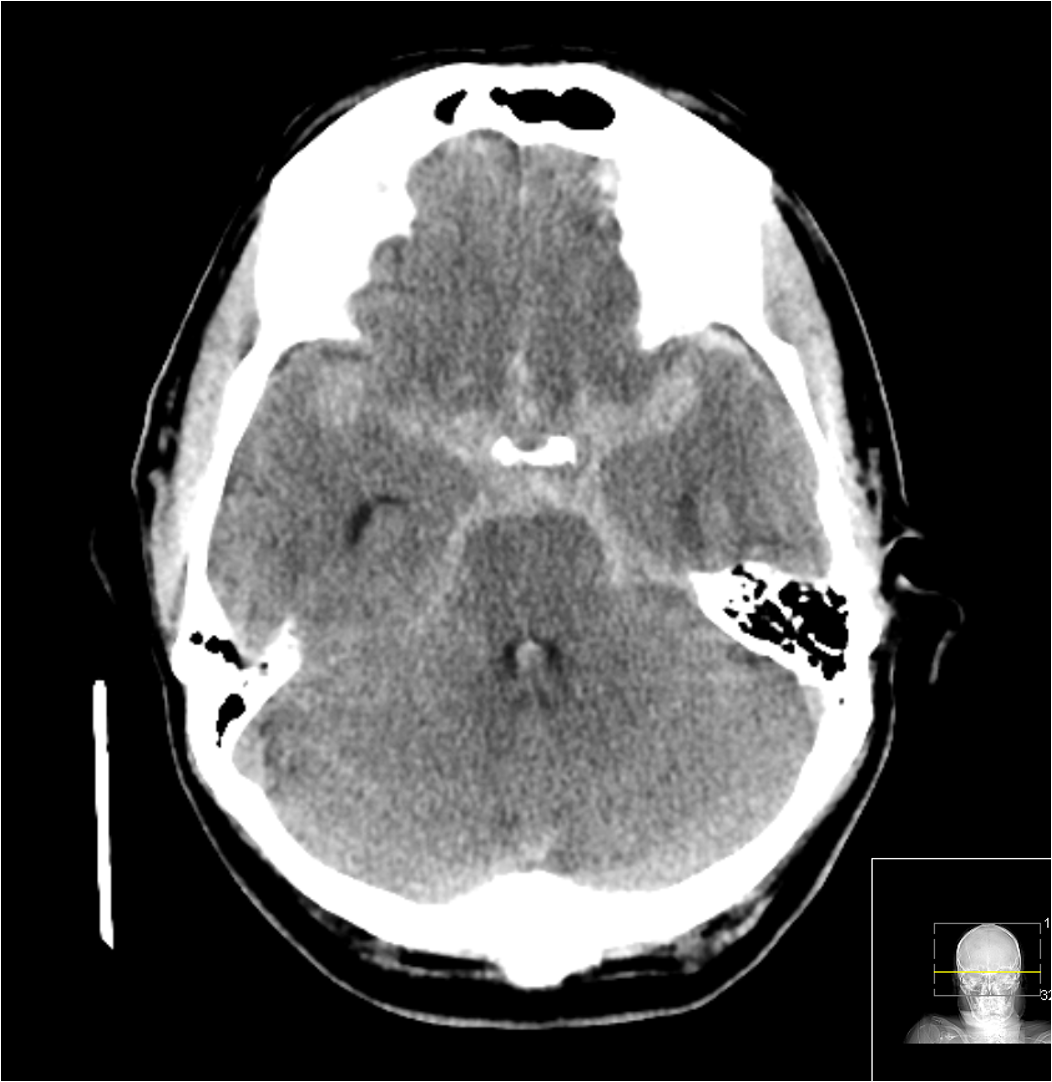 A Computerised Tomography or CT scan will confirm that a subarachnoid haemorrhage has occurred in most cases. This scan makes use of X-rays to build detailed pictures of the head or body.From a few hours after the haemorrhage until about two weeks afterwards the blood may be relatively easily seen by a trained observer. The image on the left shows a CT slice through the head and the fresh bleeding is visible projecting in multiple directions form the centre of the brain.

Occasionally the amount of blood which has leaked into the cerebrospinal fluid (CSF) is very small and not possible to discern on the CT scan. In such cases a sample of the CSF should be taken from the small of the back under local anaesthetic (lumbar puncture). This is a very sensitive test for even small amounts of blood. If negative then aSAH may be confidently ruled out in the two weeks after the headache. Beyond that time the diagnosis is more difficult to exclude.

MRI is not usually favoured to make the initial diagnosis. The logistics of placing particularly a seriously unwell person in the MR environment mean that it takes longer and may be a less safe environment without any particular advantages. Interpretation of the imaging is also less straight forward as MR is very sensitive to short term changes in the make of blood in the hours and days following haemorrhage. In may play a role evaluating a "missed haemorrhage" outside of the window when CSF examination could confidently exclude it but usually in providing indirect evidence of previous bleeding such as by demonstrating blood product staining of brain tissue.

Vessel wall enhancement is an MR technique showing promise in distinguishing aneurysms at high-risk of bleeding. However it is a research tool at present as work proceeds to validate and improve its specificity.

The most detailed pictures of the blood vessels within the brain are obtained by a technique called Digital Subtraction Angiography (DSA). After a local anaesthetic injection a small tube is passed into a large artery at the top of the leg. Occasionally an artery at the wrist, elbow or neck is used. Guided by x-rays the tube is directed into the blood vessls of the brain where dye is injected to produces very detailed pictures of the circulation. 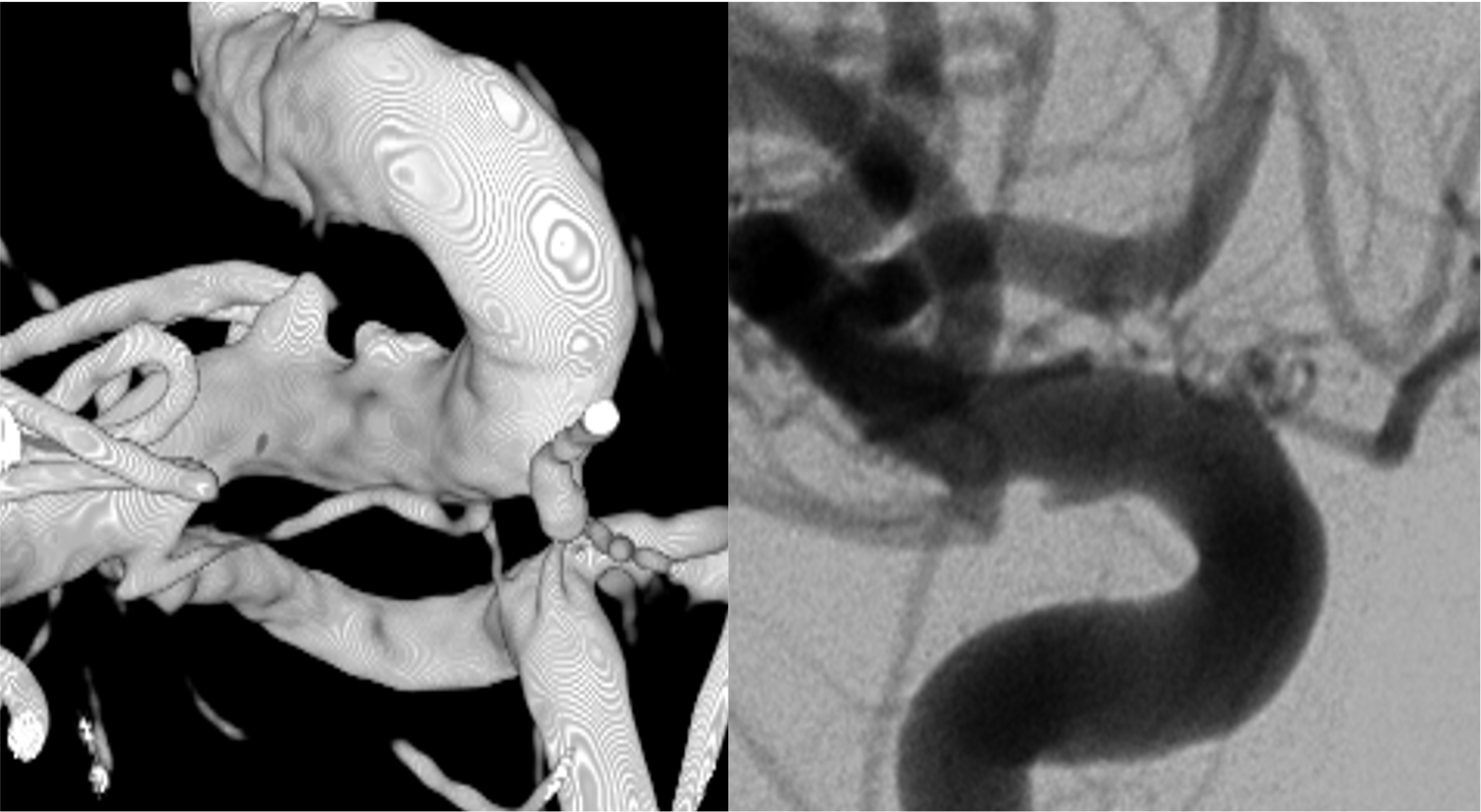 DSA is carried out by a specialist neuroradiologist who will discuss the potential risks of the procedure with the patient and/or their carers.Once a ruptured aneurysm has been located repair is recommended to prevent further bleeding. Haemorrhage from an aneurysm is a life-threatening event.

As many as 30% of patients suffering a first haemorrhage die as a result of the illness. If the aneurysm bleeds again the chance of dying rises to between 50 and 70%. We will usually endeavour to make the aneurysm secure within 24 hours of its diagnosis. Occasionally it will be recommended that treatment wait on a patient's further recovery. Your neurosurgeon will discuss the reasons for any deferral. Click here for more abouthow aneurysms are treated.