Tumours Within the Spinal Canal and Neurocutaneous Disorders

This section is devoted to the range tumours that occur within the spinal canal and its coverings. Tumours that involve the bony spinal column are usually managed by complex spinal colleagues as part of a specific multi-disciplinary team. Spinal tumours may be classified into those arising from or involving the tissues outside the dural covering of the nervous system-extradural. Those arising intradurally may be subdivided into those developing within the spinal cord itself (intramedullary) or from the dura or emerging spinal nerves (intradural extramedullary). Most of the tumours dealt with at our practice are intradural.

Intramedullary tumours (IMSCT) are a rare group of tumours arising within the spinal cord itself and occur in both children and adults. They are notroriously difficult to diagnose because the symptoms they produce are frequently non-specific, slowly progressive and more easily explicable by common, non-tumour pathologies. 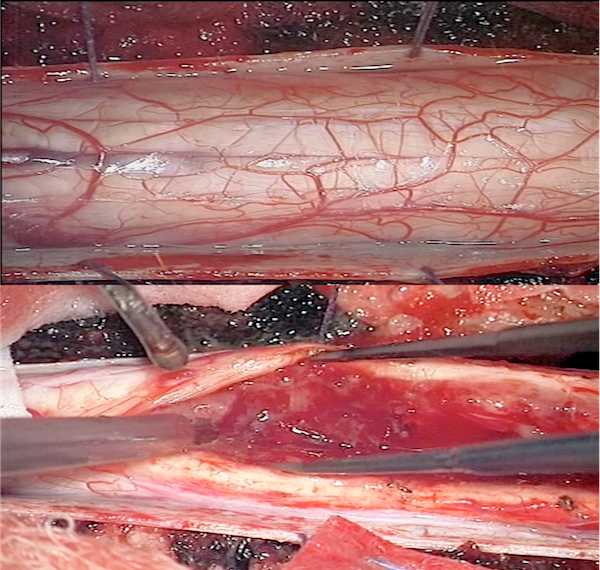 All are capable of producing signifincant and irreversible disability as they grow. Surgery for an intramedullary tumour carries significant risks but also too carries the best prospects for short and medium term control of tumours that are causing progressive disability. The surgery serves two functions- firstly to establish the precise nature of the tumour and therefore to direct subsequent managment. The second is the attempted cure or medium term control of the tumour. Some low grade intramedullary tumours (haemangioblastoma, ependymoma) may be completely cured by removal albeit sometimes at the cost of short term neurological worsening. Others which are more diffusely spread within the cord e.g. diffuse fibrillary astrocytoma may not be possible to remove completely but reducing their bulk can be enough to slow the progression of disability significantly. The image above show an intramedullary ependymoma of the cervical cord appearing once the cord itself has been gently opened in the midline.
‍

These tumours (IDEM) arise usually from the dural covering itself (Meningioma) or from the cells forming the outer sheath of the spinal nerves. Less common are benign cysts in the arachnoid layer of the meninges (arachnoid cyst) or dermoid cysts (benign growths containing cell types native to the skin). Tumours of the non functional terminal part of the spinal cord - the Filum Terminale- may also be considered in this group e.g. Myxopapillary Ependymoma. If symptomatic these tumours are usually very amenable to removal with a good safety profile

If occurring in isolation then prospects for cure are usually good. Spinal nerve sheath tumours develop in more than 40% of patients affected by Neurofibromatosis type 1 but perhaps only about 2% of those tumours cause symptoms that warrant treatment. For many patients with NF1 watchful waiting with clinical and radiological surveillence is appropriate given the propensity to develop tumours on multiple nerves over time. There is also an 8-13% lifetime risk that a patient with NF1 will develop malignant change in a previously benign nerve sheath tumour.
‍

Neurofibromatosis type 1 is a condition which results from a mutation in a gene on chromosome 17. It affects approximately 1 in 3000 people. The gene is called NF1 and codes for a protein called neurofibromin. It is a tumour supressor gene meaning that when it is not functioning the following can develop:

Neurofibromatosis type 2 is a genetically and clinically quite distinct disease to the above. It is less common affecting aproximately 1:35000 individuals. All develop vestibular schwannomas and in most these are bilateral. Other tumours assosciated with this condition include schwannomas of other cranial nerves, meningioma and spinal cord ependymoma. The gene mutation in NF2 is on chromosome 22 and its gene prodict is the Merlin protein. Juvenile cataracts may be the earliest detectable evidence of the disease.
‍

Schwannomatosis is a related condition to the above with a predisposition to developing schwannomas on the spinal nerves but never on the vestibular nerves of the ear as in NF2. Schwannomatosis usually affects males in middle age and they are usually the only member of their family to be so affected. Meningiomas occur very rartely. The gene abnormalities are distinct from the NF2 gene abnormality and at least two implicated genes have been identified on chromosome 22 close to the NF2 gene. (SMARCB1 and LZTR1)
‍

Approximately 20% of central nervous system haemangioblastomas occur in patients affected by Von Hippel-Lindau disease(VHL). This is a condition resulting from mutation of a gene on the shrt arm of chromosome 3. The mutation is inherited in 80% of cases but occurs de-novo in 20%. Someone with a parent harbouring the defective gene will have a 50% chance of inheriting the gene.The disease itself does not usually appear in childhood. Most patients will develop one of its manifestations by age 40. VHL causes tumours to develop in various locations throughout the body. For more infromation about VHL please click here. 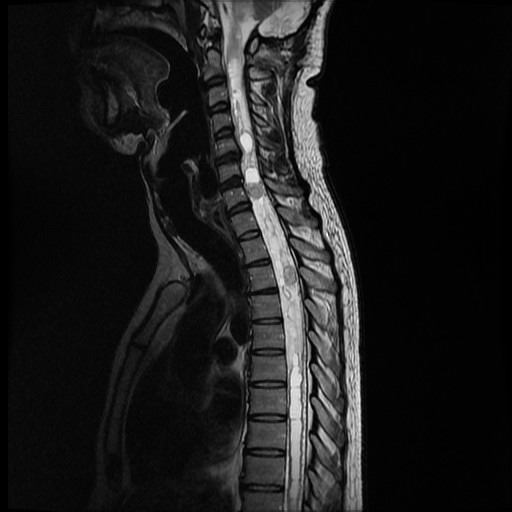 For some with VHL they will develop a large number of tumours within the spinal cord. This may mean it is difficult to work out which tumours are most biologically active and therefore potentially in need of treatment. Such decisions are best made with an experienced multidisciplinary team.