Certain tumours within the nervous system develop a very florid blood supply. Blood may be diverted within them back to the venous system (arteriovenous shunting- read why that may be a bad thing here) meaning that their removal can entail a large amount of blood loss. Some tumours develop from tissue that resembles blood vessels. Tumours of the skull base may parasitise blood supply from the tissues of the head and neck as well as the brain and sometimes they will encase the major vessels entering the brain. The neurovascular techniques described elsewhere in these pages can help to manage these problems e.g. endovascular embolisation or microsurgical bypass. 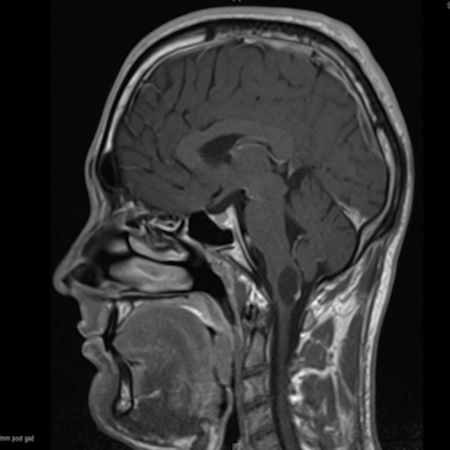 Haemangioblastomas are benign but highly vascular tumours that may occur in the brain or spinal cord. Typically in the brain they are located in the posterior fossa (adjacent or within the cerebellum and brainstem). They are also found as part of an inherited tumour syndrome, Von Hippel-Lindau disease. Most occur in the cerebellar hemispheres but they are also found in the brainstem and spinal cord. The image to the right shows a cystic haemangioblastoma within the medulla of the brainstem which was successfully removed without any deficits. Other locations have been described but are extremely rare. They arise from cells within the nervous system called stromal cells and are characterised by rich networks of blood vessels making up the tumour. Abnormal connections develop between the arterial and venous sides of the circulation and these tumours acts as small vascular malformations. Two distinct types are recognised: 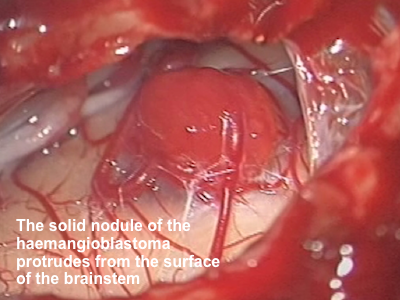 They arise from cells within the nervous system called stromal cells and are characterised by rich networks of blood vessels making up the tumour.

Abnormal connections develop between the arterial and venous sides of the circulation and these tumours acts as small vascular malformations. The tumour nodules have a distinctive pumpkin orange colour that distinguishes them from surrounding nervous tissue. However if the nodule is entered they bleed profusely and so are usually best dealt with by circumferential dissection and en-bloc removal.
‍

Cystic haemangioblastomas account for approximately 60% of cases. The cyst does not have a true, cellular wall of its own but its margin is made up of compressed brain tissue- a pseudocyst. Removal of the solid tumour nodule contained therein will be sufficient to completely treat the lesion. Symptoms have often been precipitated by an increase in the size of the cyst in the first place.

Solid Haemangioblastomas account for 40% of the total and these can provide more of a diagnostic as well as a therapeutic challenge, especially if the patient is not known to have Von Hippel-Lindau disease. Endovascular embolisaiton is occasionally helpful with these lesions to limit peri-operative blood loss although we use it very selectively becuase of associated risks of tumoural swelling. It has been our experience that if similar surgical technique is deployed as when removing an arteriovenous malformation, these lesions may be removed with very little blood loss. Stereotactic radiosurgery offers an alternative for inoperable lesions although without the benefit of confirming the tissue diagnosis.
‍

Approximately 20% of central nervous system haemangioblastomas occur in patients affected by Von Hippel-Lindau disease (VHL). This is a condition resulting from mutation of a gene on the short arm of chromosome 3. The mutation is inherited in 80% of cases but occurs de-novo in 20%. Someone with a parent harbouring the defective gene will have a 50% chance of inheriting the gene. The disease itself does not usually appear in childhood. Most patients will develop one of its manaifestations by age 40. VHL causes a variety of tumours to develop in various locations throughout the body:

Those affected by VHL benefit from genetic counselling and from regular screening for the development of new tumours. Most of the benefit form regular screening however comes from the early detection of cancers in the kidney when they are aenable to treatment. Consequently a multi-disciplinary team consisting of urologists, endocrinologists, neurologists, opthalmologists and geneticists as well as neurosurgeons is required to service the follow-up of this condition.

New tumours developing within the nervous system do not always require immediate intervention if they are without symptoms. Neither is growth in such haemangioblastomas always assosciated with the development of symptoms. Because these tumours exhibit staccato growth were one to operate on every tumour that grew a little on a scan a great deal of unnecessary surgery would be the result. Regular contact with an experienced neurological team allows treatment to be planned when symptoms are at an early stage.