The term spinal vascular malformations encompasses a range of rare conditions some of which are straightforward to treat as well as those that are extremely complex. The affect a range of age groups and once again are best managed in the setting of an experienced multidisciplinary team. We have been fortunate to build considerable experience with spinal vascular malformations at this practice.

Diagnosis is not infrequently delayed by the insidious onset of symptoms and unfamiliarity with the diagnosis on the part of non-specialists. The appearances on imaging can also mimic other neurological conditions such as neuroinflammation leading the patient and their doctors down a lengthy path of investigations that yield no positive results.

The diagnosis therefore requires a high index of suspicion on the part of physicians. The appearances are often typical on MRI and it is this which usually first suggests the diagnosis. Spinal catheter angiography will be required but is technically and time demanding, requiring the interrogation of a large number of vessels and often necessitating a general anaesthetic to facilitate the patient's comfort. These investigations will usually be able to categorise the malformation into one of the following groups.
‍ 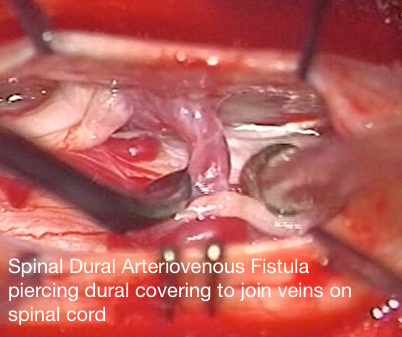 Dural arteriovenous fistulae are the commonest of the spinal vascular malformations, they are probably acquired and usually develop later in life, typically the seventh or eight decades. Men are more frequently affected. The most common subtype (a) consists of a single fistula although in about 5% of cases there may be another.

Usually a single fistulous vessel pierces the dural covering of the spinal cord close to here a nerve root is exiting. This then joins anomalously to the venous plexus which normally drains blood away from the spinal cord. The resultant congestion of the spinal cords venous drainage prevents the efficient transfer of oxygen to the cells of the cord and the neurones begin to die.

The symptoms are often insidious and this may lead to delays in diagnosis. Patients experience loss of sensation in the legs with resultant difficulty walking or balancing. They may experience difficulties with control of the bladder- at first an urge to micturate frequently or a sense of urgency. This may progress to frank incontinence. Because these symptoms often develop and progress slowly the diagnosis may take some time to make. MRI scan is the most appropriate test and the appearances of a spinal cord affected by a spinal dural fistula are very characteristic with swelling evident within the cord itself and dilated veins on its surface.The diagnosis is confirmed with a spinal angiogram the quality of recovery is determined by how much harm has already been done to the cells of the spinal cord before treatment making the prompt diagnosis and treatment of spinal dural arteriovenous fistulae very important. 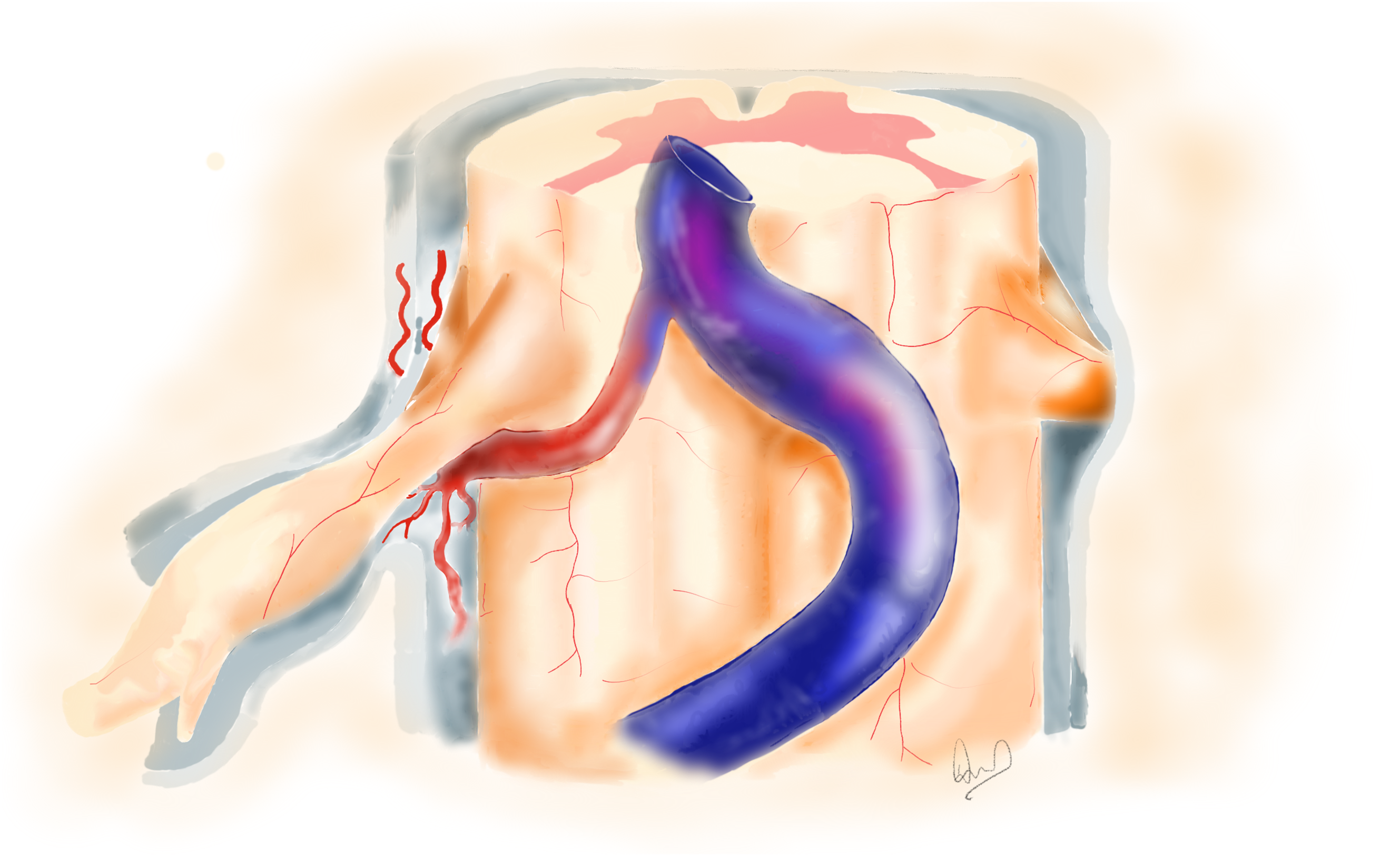 Although endovascular treatment is possible microsurgical division of the fistula is usually recommended as more reliably and quickly normalising the delivery of oxygen to the spinal cord without excessive risk.
‍
‍

These are true arteriovenous malformations similar to those encountered within the brain. They may present with haemorrhage or with symptoms caused by reduction in blood flow to the spinal cord. 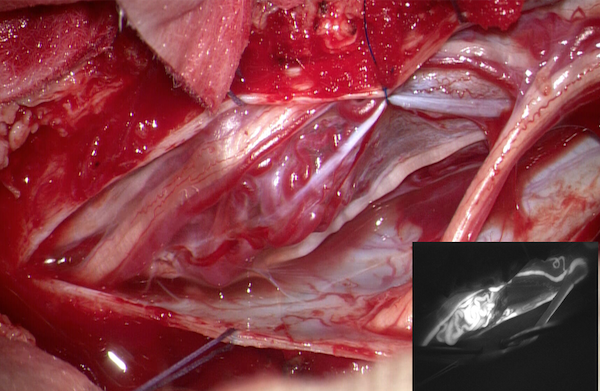 These are very rare lesions and tend to affect younger people that Type I fistulae, including very young children. The diagnosis will usually be made by MRI and confirmed with a spinal angiogram. Treatment can be complex and this will be determined by the results of thorough investigation. A combination of therapies may be used consisting including microsurgery, endovascular embolisation and stereotactic radiosurgery. A compact arteriovenous malformation may be amenable to microsurgical removal as shown to the left.
‍
‍

The nidus of an arteriovenous malformation of the spinal card may be compact or diffuse just as with their counterparts in the brain. Their location within the spinal cord may also determine which treatment they are most amenable to. They're behaviour is slightly different to brain AVMs from the surgical perspective as they tend to have a much slower rate of blood flow through them. A diffuse AVM is likely to have functional spinal cord interspersed within elements of the nidus so that removing it is likely to visit significant injury. 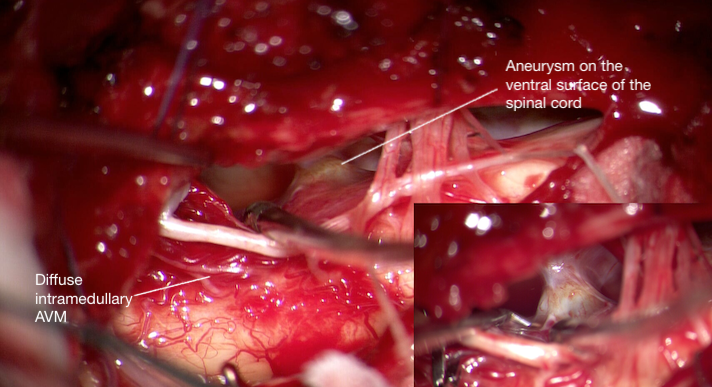 An alternative that has proved valuable in diffuse SVMs is in-situ disconnection. This is feasible where the arterial supply and venous drainage can be isolated on the pial surface of the cord. The example shown to the right was complicated by the development of an aneurysm on the anterior surface of the spinal cord which ruptured resulting in subarachnoid haemorrhage. The assosciated AVM was disconnected in-situ with the aneurysm secured at the same time.
‍

Arteriovenous malformations may involve more than one tissue type. In such cases there is likely to be a gene fault affecting the development of normal vascular beds in all these tissues. Such AVMs may involve the spinal cord, dura, vertebral bone, muscle and skin.

In the embryo tissues develop segmentally- in a repeating pattern one block of tissue after another each with its own blood vessels arising from the main cetral vessel, the aorta. In the embryo these segments of tissue are termed metameres. Thee are 31 pairs of metameres and any may be involved in what has come to be termed Spinal Arteriovenous Metameric Syndrome or SAMS types 1-31. It is a non-hereditary genetic condition.

Perimeduallary arteriovenous fistulae (PMAVF) differ from dural arteriovenous fistulae in that the fistula is formed between artery and vein on the surface of the cord itself rather than within the dural leaflet that surrounds the spinal cord. Usually the anterior spinal artery irrigates the fistula meaning the it is often easiest to treat endovascularly. However we have enjoyed considerable success with microsurgical treatment of PMAVF when endovascular occlusion was not feasible.

Perimedullary fistula may be grouped in three subtypes- (a) single fistulae, (b) multiple fistulous points and (c) giant polyfistulous varicose lesions. The latter may easily be mistaken for arteriovenous malformations.
‍

We have encountered these as a cause of sciatica with good relief obtained with endovascular occlusion of the extradural shunt. Microsurgical disconnection of intradural drainage can downgrade or occlude a SEAVF and improve spinal cord perfusion.
‍