Benign intracranial tumours cause harm by the pressure they exert on adjacent structures. The commonest benign tumours arise from cells lining the brain or close to the cranial nerves emerging from the brain. They can pose siginificant treatment challenges because of their sometimes intimate relationship to vital structures. 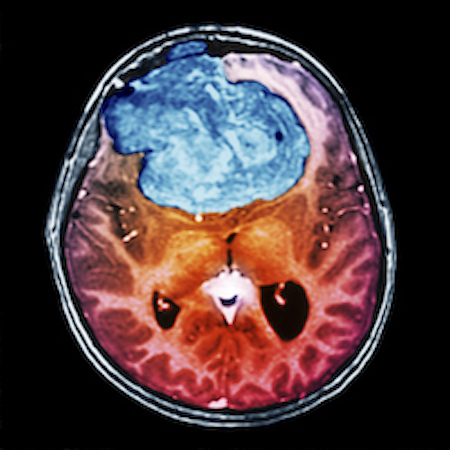 Meningiomas arise from meningothelial cells in the arachnoid layer covering the brain. This discrete layer is closely applied inside the dural covering. They account for about 20% of all primary brain tumours. The vast majority are benign (WHO grade 1) but atypical types which are more prone to recurrence (WHO grade II) and even frankly malignant tumours (WHO grade III) are encountered. Meningiomas may occasionally involve the skull bone and cause it to thicken. Very rarely the scalp itself may become involved by the tumour.

Small meningiomas which are not growing over time and not causng symptoms may be safely left alone. It is however advisable to monitor them for a period of time. The duration of such surveillence will be affected by the size and location of tumour as well as the patient's time in life. Surgical removal offers the prospect of cure for most meningioma although it is usual to monitor the patients with CT or MR scans for some years after surgery. It is our experience that if WHO grade I lesions reccur they will usually do so within two years.

The best prospect for cure is to remove not only the tumour but also the section of dura to which it is attached. This is not always possible especially with tumours arising along the skull base or enclosing important venous sinuses. Treating the dura that remains with electrocautery can reduce the chances the tumour will come back. If recurrent but benign tumour is an ongoing problem radiosurgery or radiotherapy to the origin can be effective at controlling growth.

For some small, symptomatic meningiomas of the skull base radiosurgery may be considered as primary treatment. Good control rates are possible with good safety. Radiosurgery may also provide an adjunctive treatment where an element of the tumour involves structures where the tumours dissection would entail causing disability. Having made the tumour smaller any residual in such an area may be adequately treated by radiosurgery afterwards.

When meningiomas encase blood vessels at the base of the skull e.g. the internal carotid arteries, techniques from cerebrovascular neurosurgery may be required either to repair these blood vessels or to create an alternative parallel circulation, cerebrovascular bypass. Occasionally endovascular embolisation may be used to reduce blood flow to a particularly vascular tumour.