This is a very wide ranging topic and below are only a selection of the issues that arise as part of elective practice. Please get in touch if your particular problem related to trauma of the head or face is not addressed below and we will see what we can do to help.

Injuries to the cranium and its contents occur at all ages and their consequences are continuing to be understood. Some brain injuries constitute very time-dependent emergencies and usually present acutely throught the emergency room. Some however present are slower evolving conditions and there are elective procuedures to reconstruct or correct the cosmetic consequences of injury.

There are several patterns of brain injury occurring alone or in combination. Blood clots pressing on the surface of the brain are named for there relationship to the brain's covering, the dura. Extradural haematomas usually result from an arterial tear in the dura and have a good outlook in isolation and if treated promptly. Subdural haematomas collect beneath the dural covering and more often result from a venous tear on the surface of the brain. Traumatic subarachnoid haemorrhage is bleeding into the fluid spaces around the brain deep to its arachnoid covering and requires distinction from the similar bleeding resulting from aneurysm rupture. Contusions are bruises to the substance of the brain while diffuse axonal injury describes a microscopic injury related to shearing between the grey and white matter of the brain. All of these can occur in combination.

Post-concussive syndrome is a term used to describe residual symptoms that complicate the recovery phase of even a relatively minor brain injury. Imaging may not show any abnormality. Symptoms include:

For most concussion will be short lived. If symptoms persist beyond three months following a head injury it is also worth checking the biochemical function of the pituitary gland. The pituitary gland produces hormones that regulate a range of metabolic functions.
‍

Chronic subdural haematoma is one of the most common neurosurgical emergency conditions. Older persons are more likely to be affected as the natural reduction in the volume of the brain later in life creates a potential space where blood can collect between the dural lining of the brain and the cortex itself. Tiny "bridging" veins that connect the brain to the dura are placed under slight tension as the brain separates from the brain surface making them more prone to shearing and tearing. Under these conditions a relatively minor blow to the head e.g. striking ones head against low beam, may go unremarked at the time although a small amount of bleeding occurs which collects in the subdural space. Because there is room to accomodate the bleeding usally there are no immediate serious consequences. 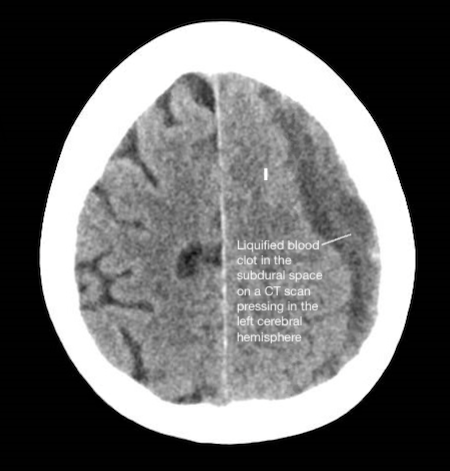 To begin with the small amount of blood clot has the consistency of jelly. Over the next several weeks it liquifies and as it does so it may expand, occupying more space and pressing harder on the brain beneath. Inflammatory membranes may develop that prevent the body from reabosrbing the blood copletely and they continue to produce fludi that collects in the subdural space. Symptoms therefore may only develop many weeks after the original injury has been forgotten. The use of blood-thinning drugs such as aspirin or anticoagulants such as warfarin or NOACs, increase the likelihood such problems will develop after otherwise trivial head injuries.

No all chronic subdural haematomas produce serious symptoms and require surgery. A proportion do however. The symptoms may include but are not limited to:

Because the blood clot is usually liquid it may be released through small holes. These may be made under general or under local anaesthesia as circumstances dictate. It is our usual practice to place a drain in the subdural space for forty-eight hours after drainage in most cases. This is a proven method to reduce the risk of recurrence which is significant with chronic subdural haematoma. Rarely, if acute bleeding is encountered during surgery, a craniotomy - or door opening in the cranium- is required.

Recently endovascular embolisation of the middle meningeal artery within the dural leaflet has been proposed as a means to reduce the blood supply to subdural membranes and reduce the volume of subdural fluid collecting. The precise indications remain to be established but it may offer an option for patients who suffer multiple recurrences of their collections.

Decompressive craniectomy is a procedure where a large door is raised in the cranial vault to allow an injured brain to swell with pressing on adjacent uninjured brain. It is usually carried out as an emergency in order to save life. The commonest indications are follwoing traumatic brain injury or after a large stroke (Malignant middle cerebral artery stroke). Occasionally a defect in the cranium result from having to remove infected bone or a piece of bone which has been involved by a tumour. The image below is constructed from a CT scan and shows there has been a hemicraniectomy awaiting reconstruction. 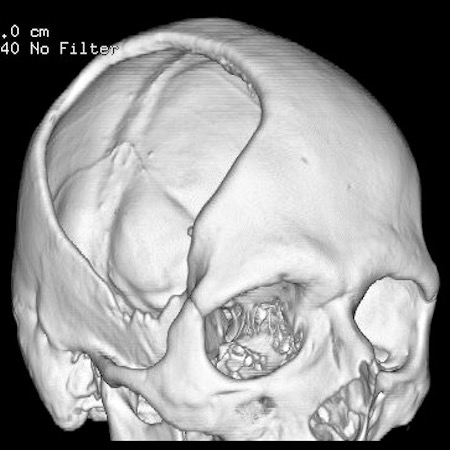 The bone taken from the skull can be stored or implanted under the abdominal skin to preserve it until it can be reimplanted. However the bone is living tissue and once out of its natural enviroment it will shrink and the cosmetic results after reimplantation may not be as good as one would hope. Also this technique- called autologous cranioplasty- may be assosciated with an elevated risk of infection

A 3D printed plated designed on a template created from CT imaging of the skull defect can provide a perfect reconstruction and excellent cosmetic result. The materials we currently favour produce very little distortion on MR imaging subsequently and minimise the redundant space beneath the plate where blood may collect. It is possible to create complex plates to reconstruct the bones of the skull and the facial skeleton.