The spinal cord emerges below the brainstem and links the brain with the rest of the body. The cord travels through the spinal canal distributing spinal nerves on either side.

The lowest part of the spinal canal is occupied by nerve roots arising from this lower part and collectively forming the Cauda Equina. 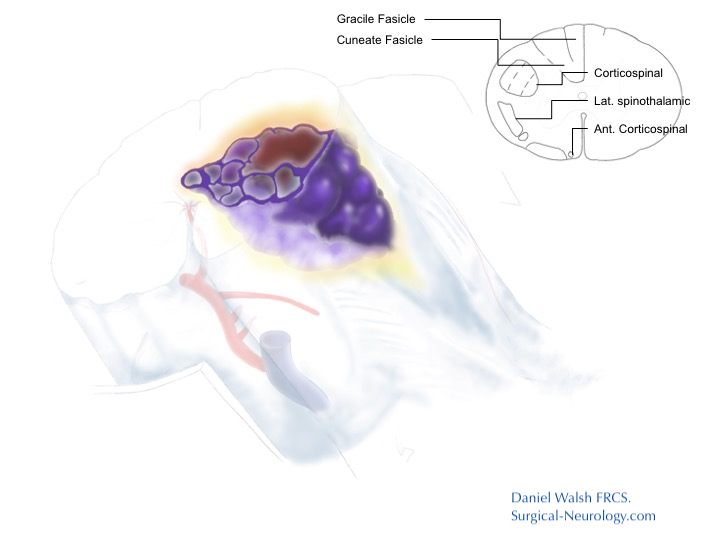 Cavernous malformations of the spinal cord are rare relative to their cousins in the brain. They co-exist in both locations in 16-25% of cases.

The thoracic segments of the spinal cord (chest level) are most commonly affected followed by the cervical cord. The malformations usually occupy space dorsal to the equator of the cord and their exact relationship to the fibres passing them in the cord determine what symptoms they may cause.

At the back of the cord in the dorsal coloumns (made up of gracile and cuneate bundles of fibres- see the figure above) information tracking the position of joints, touch-discrimination and vibration. Fibres that initate voluntary movement are located further forward and at the periphery of the cord. There is almost no redundant tissue in the spinal cord and disturbance of the tissue results in deficits.

In approximately 55% of cases a cavernoma of the cord is discovered when haemorrhage results in sudden and catastrophic loss of function below the level of the cavernoma.

The true risk of a first-ever symptomatic haemorrhage from a cavernoma is not known because of their relative rarity. In a review of all the published cases to date it was estimated at approximately 2.1% annum. Haemorhage from a thoracic cavernoma may produce sudden loss of power and feeling of the legs together with loss of badder, bowel and sexual function. If a similar event were to occur in a malformation located in the cervical cord then the upper limbs could be additionally involved and perhaps the main muscle of respiration, the diaphragm.

As with cavernomas in other locations the development of symptoms may be more insidious as blood products slowly accumulate in the tissue around the cavernoma. Early microsurgical removal is often advocated in such cases.

In truth the actual incidence of neurological deterioration in those who harbour an asymptomatic spinal cord cavernoma is not known with certainty. The medical literature for the most part consists of reports on what happened to those who became known to the medical profession because of their symptoms. Consequently a decision to remove spinal cord cavernoma requires careful balance of the benefits against the likely consequences of intervening.
‍

The definitive treatment of a spinal cord cavernoma is microsurgical removal.

In our hands the procedure is carried out with the help of intraoperative neurophysiological monitoring. Electrodes in the scalp send tiny electric shocks through the spinal cord and these may be recorded from peripheral nerves. Changes in the quality of these signals indicate that the nervous tissue in the cord may be being hurt and afford and opportunity to try and modify the operation in hopes of mitigating any harm. Contact electrodes placed against the spinal cord itself provide information on the condition of the most important tracts facilitating voluntary movements.

Panels A and B a lower thoracic intramedullary cavernoma first on axial and then sagittal plane MR scans, Panel C shows the localisation of the cavernoma within the cord with ultrasound as it is not visible on the surface of the cord (D). The cord is opened in the midline in this case to gain access and remove the cavernoma (F-H) 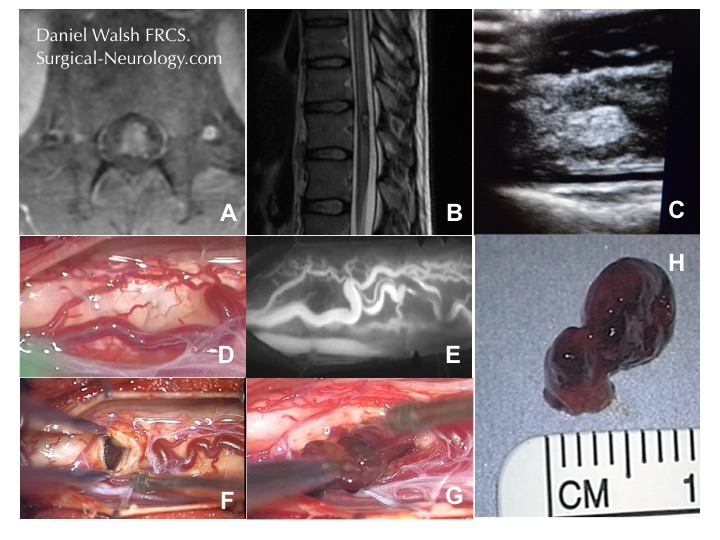 The cavernoma is gently separated from the surrounding nervous tissue. There is usually very little bleeding from the lesion itself.

No attempt is made to remove the golden coloured nervous tissue surrounding the malformation. in the brain this is often done to ensure complete removal or to increase the likelihood that a seizure disorder would be helped. In the spinal cord however such dissection is very likely to affect function and it is prudent to leave it be.

Once satisfied that the cavernoma has been completely removed the incisions are closed with tiny sutures, thinner than a hair. The very best of outcomes will usually mean that there is a temporary disturbance of ones ability to co-ordinate movements, affecting the ability to walk or use the hands.

For most uncomplicated cases this will gradually recover. There is always a risk of new deficit however that must be consider beforehand. In the example below the cavernoma has erupted through the surface of the spinal cord but the normal structure is restored after closure. 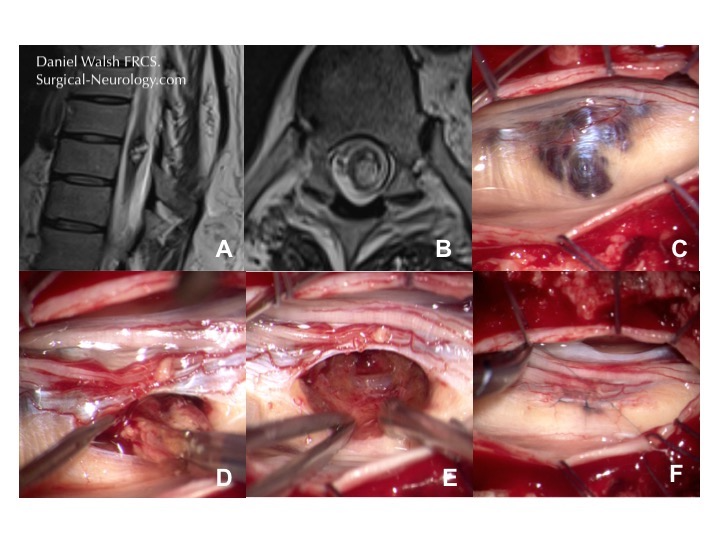 As with brainstem and deep nuclei cavernomas operating in these areas is difficult given the density and importance of functional neurological tissue surrounding the cavernoma.

Usually spinal cord cavernomas will be most safely approached through the back of the spinal cord even when they are located more towards the front of the cord because the larger sensory nerve bundles tolerate manipulation best. Thankfully most spinal cavernomas are situated dorsal to the equator of the cord.
‍