An arteriovenous malformation of the brain will not inevitably bleed and the question of what to do in that situation remains very vexed. Living with the malformation carries a degree of risk but  that risk might be exceeded by the procedural risk of treatment to obliterate the avm. Medical science does not have all the answers as yet but a specialist will be able to discuss the uncertainties with you enabling a shared decision tailored to your personal circumstances. 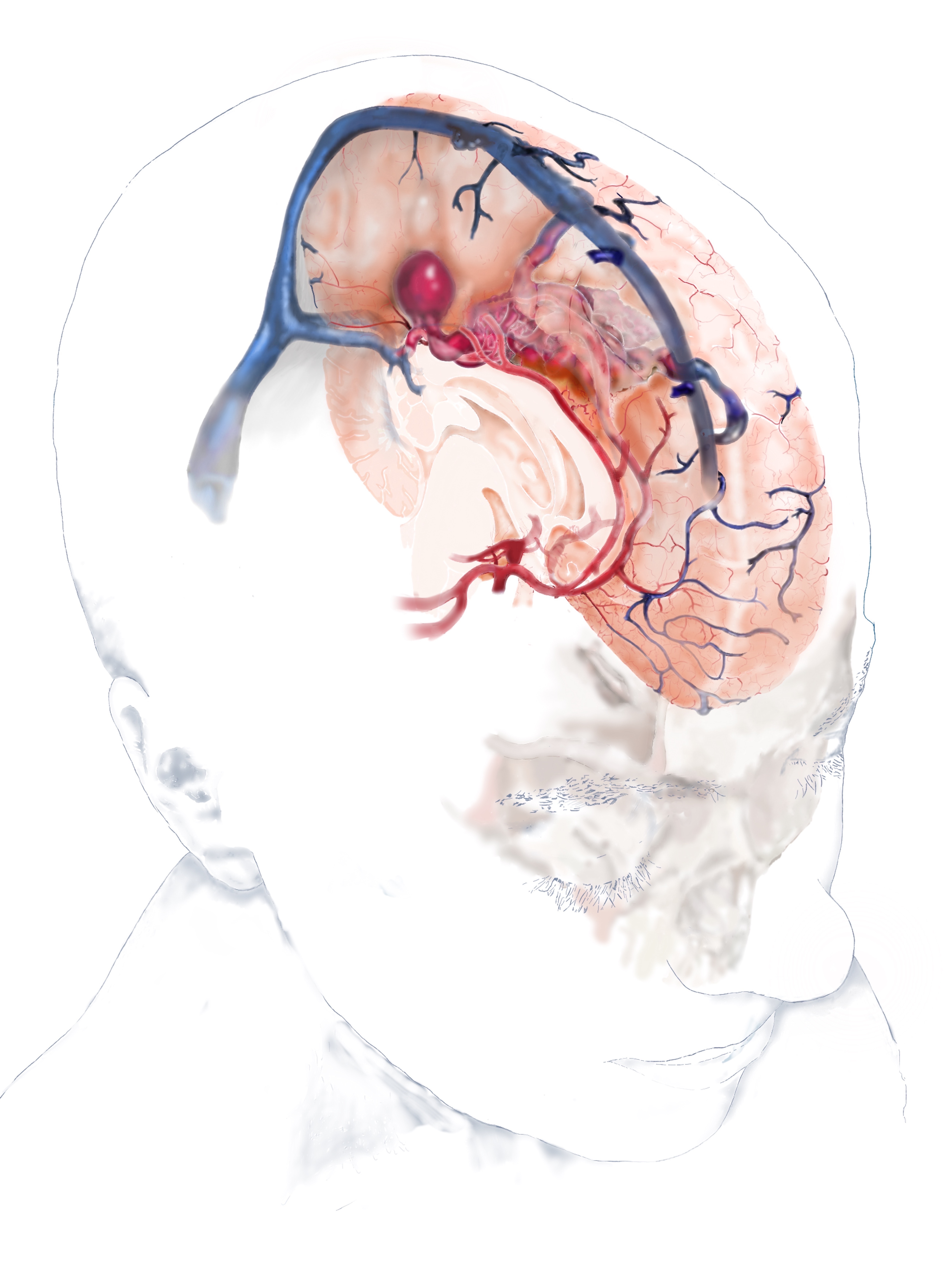 Increasingly brain AVMs are first discovered when an individual undergoes cross-sectional imaging of the brain with CT or MR for an unrelated reason. Access to high-quality imaging has become much more widespread and affordable. This is a double edged-sword as carrying out imaging in well individuals risks identifying lesions with the potential to harm them in the future but where that risk might well never be realised. Treatment of asymptomatic lesions exposes one to risks associated with that treatment.

It is estimated that AVMs are present in 0.15% of the population and such discovery poses difficult questions for someone who has no symmptoms caused by it. After all the risks we estimate that an AVM might believed may not be realised for many years in the future if indeed they are realised at all.

Should you be concerned that you might harbour an AVM (or any other central nervous system disease) because a relative has been diagnosed then we strongly recommend you speak with a specialist about your concerns before undergoing imaging. If you are considering undergoing health-screening imaging pre-scan counselling regarding unexpected asymptomatic discoveries should form part of the process.
‍

Risk of a first and subsequent haemorrhage

Arteriovenous malformations of the brain (AVM) are found in about 10 to 18 per 100000 people. Many remain undiscovered causing no symptoms throughout a person's life. They develop early in childhood or are present at the time of birth.

The high rate of blood-flow through an AVM places stresses on the vessels which may eventually result in bleeding. Aneurysms may develop on the arteries, veins or within the nidus which represent particularly weak area prone to haemorrhage. An AVM may develop in many parts of the body but in the nervous system are of particular concern because of the damage that bleeding within the brain or spinal cord may cause. Such AVMs are sometimes termed pial AVMs.
‍

To Treat of Not to Treat?

Ideally we would like a decision to deliver treatment to be supported by the results of randomised controlled trials (RCTs). Ideally a treatment has is proven safe and effective after comparison with a sham treatment (a placebo) or with no treatment at all.

For example the carotid endartrectomy operation has been demonstrated in several RCTs to reduce the lifetime risk of stroke in selected patients with narrowings of the internal carotid artery in the neck. It is very difficult however to carry out RCTs in a rare condition such as BAVM as there is a smaller pool of patients willing to randomly undergo treatment or live with their condition. Another challenge is to ensure one is "comparing apples with apples" given the great variation in size and blood flow between individual AVMs.

"At present the question of whether an unruptured AVM is best treated or not remains unanswered..."

An attempt has been made to do this for brain AVM and the results published as A Randomized trial of treatment for Unruptured AVM ( ARUBA). The trial was halted when it became apparent that neurological worsening or death was three times more prevalent in treated patients compared to those only observed. The interpretation of this result was that the trial did not support treatment of an unruptured AVM.

Many specialists in the treatment of AVM had significant reservations regarding this interpreatation of the result. The end-point of complete obliteration of an AVM was not reached for many patients which may have explained some of the observed complications. Most patients were treated with radiosurgery or endovascular techniques when one would have anticipated from the reported characteristics of the AVMs that surgical treatment would have been an appropriate means of completely treating them. Yet only 22 of 106 treated patients had surgical removal.

It has not however been the only research to suggest observation is safer than proactive treatment for unruptured BAVM. The New York Islands AVM study identified the uncertainty as to wheter treatment was necessarily superior to observation and was an inspiration to conduct the ARUBA trial. The Scottish Intracranial Vascular Malformation Study (SIVMS) suggested a similar conclusion to ARUBA although it was an observational population study not designed to compare treatments. Again only a minority of participants received surgical treatment so these studies could be regarded as primarily reflecting the outcome of radiosurgical and endovascular treatment.

To answer this question scientifically in such a rare and variable disease is extremely difficult. These studies do emphasise that the treatment of an unruptured AVM always comes with risk irrespective of how it is treated.
‍

Given their variability brain AVM may cause a variety of symptoms even if they have not bled. This is often affected by precisely where they are located. Below the commonest clinical presentations are described briefly.

The term Epilepsy refers to a family conditions sharing a tendency to experience seizures. The brain is made up of a complex network of cells communicating through electrochemical signals. A seizure occurs when nerves cells begin to discharge in an uncontrolled way and the effect on the individual is determined by which particular nerve cells begin the discharge as well as how far it spreads through the network.

Seizures associated with brain AVM begin in the brain adjacent to the malformation where a thin layer of nerve cells suffer damage as a result of relatively reduced blood flow and the presence of large pulsating vessels nearby. The development of seizures is what leads to the diagnosis of an AVM in 16-53% of cases.

As one of the causes of epilepsy, treatment may sometimes improve seizure control. It is relatively rare for someone with AVM related epilepsy to be rendered completely seizure-free and without medication so it is not usually the sole reason to consider treatment. Intervention too may initiate seizures in those without epilepsy. There are cases of intractable AVM-related epilepsy, resistant to medication where definitive treatment may be advisable where feasible. In such cases the input of the epilepsy-surgery multidisciplinary team is valuable. Microsurgery and stereotactic radiosurgery have both been shown to have potential to improve such seizure control providing the AVM is completely obliterated.

Seizures will occasionally occur at the time of a haemorrhage from an AVM and may complicate its recovery.
‍

Headaches lead to the diagnosis of an in AVM in 7 to 48% of cases. The precise mechanism by which unruptured AVMs might cause headache are not always clear.

Blood clotting (thrombosis) within the AVM circulation may precipitate swelling around it resulting in headache. Such swelling may lead to bleeding but not always. Conditions that might predispose to such thrombosis include, fever, dehydration or haematological disease.

Of all people presenting with headache only 0.2% are ultimately diagnosed with an AVM. Incidental benign headaches are far more common than BAVM. Migraine headaches may be more common in those with AVM compared to those without and a particular association with AVMs of the occipital lobes has been suggested.
‍

Tinnitus is when a noise is perceived although no external sound is present. Different types of sound are described ranging from high-pitched whine to whooshing noises that may be in time with the pulse or respiration. Some types of tinnitus are thought to result from an abnormal perception of sound occurring at the level of the brain and cannot be detected by a third party- subjective tinnitus. If an arteriovenous shunt is present, arterial blood entering venous sinuses in proximity to the ear may manifest as a pulsatile tinnitus, its pitch varying with the pulse. This is a variety of objective tinnitus which can be detected by a third-party by, for example, listening with a stethoscope placed against the skull. The noise detected is called a cranial bruit.
‍

Focal neurological deficit (FND) is a collective term for symptoms that mimic a stroke. e.g. a weakness or loss of feeling. Such symptoms may be reversible. FND associated with AVM is very infrequent and the mechanism difficult to demonstrate. It is frequently attributed to a cerebrovascular steal phenomenon where the demand for blood flow through the nidus reduces blood flow in adjacent functional brain tissue. However the scientific basis for such a phenomenon is weak and if steal systems exist at all they are likely to be extremely rare.
‍