Dural arteriovenous fistulae that affect the brain (BDAVF) arise from abnormal connections that develop between the blood supply tot he coverings of the cranial cavity (scalp, skull, dura) and the circulation that service the brain, two systems that communicate minimally under normal circumstances.

It is believed that BDAVF acquired rather than being present throughout life. Thrombosis, the formation of a blood clot appears a key step in their formation. As a result of thrombotic occlusion of pre-existing vascular channels in the walls of veins within the dura itself and/or chemical signalling to direct new vascular channels to appear, a new "short circuit" develops where by high-pressure blood from the arteries is diverted into the low-pressure venous system of the brain thus preventing it from functioning as it should.

Should the diverted blood be confined to the veins within the lining of the brain the risk of stroke is very low although this can still produce troublesome symptoms. When the blood drains into he veins on the surface of the brain, they are stressed by this additional work and may eventually give way resulting in brain haemorrhage. This pattern of drainage is referred to a cortical venous hypertension and characterised the more dangerous "high-grade" dural arteriovenous fistula.
‍

BDAVF may remain completely asymptomatic or they can produce a vast array of neurological symptoms determined by the architecture of the particular fistula. These include but are not limited to: 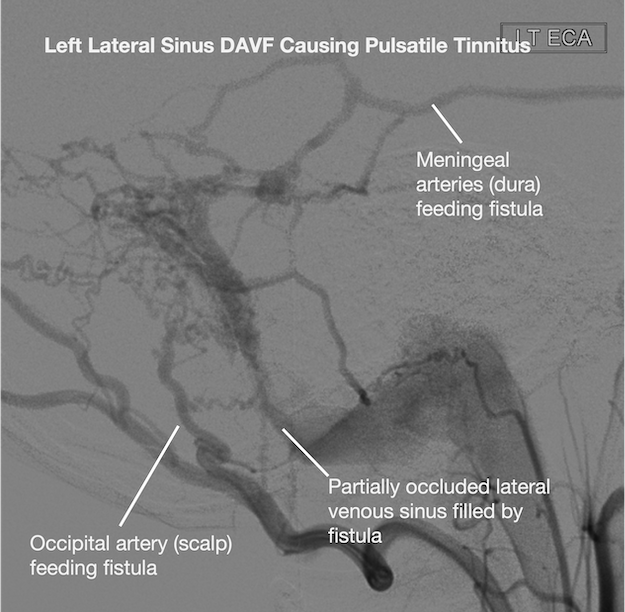 BDAVF can change their behaviour either upgrading or downgrading their risk. Therefore if symptoms change the fistula should be re-evaluated. An example might be of a low-grade fistula causing tinnitus that a person chose not to treat because the disturbance to them was mild. Should that sound suddenly disappear that could reflect a change in the architecture of the fistula and it should be reassessed to ensure it has not increased its risk. 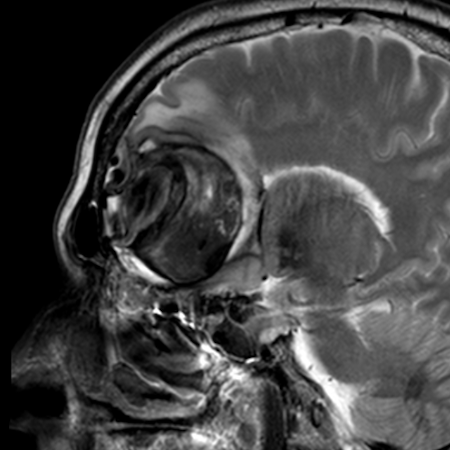 A symptomatic high-grade fistula with cortical venous hypertension is estimated to have a risk of stroke of at least 7-8% per year meriting consideration of its protective treatment.

This example to the right shows how a draining grain has grown so dilated from years of draining high pressure blood it grew to a size which at first was mistaken for a brain tumour and then an arterial aneurysm. This patient came to medical attention after suffering a seizure.

The majority of BAVF lend themselves to endovascular treatment where a catheter is passed via the arteries or the veins with the goal of occluding the draining venous channel at the point where it forms. Endovascular techniques are especially useful when the fistula involves a venous sinuses within the structure of the skull bone. The channel is  occluded using liquid embolic agents or coils as described here.

Microsurgical treatment requires this final common channel be disconnected from the rest of the venous system of the brain. This remain a very useful treatment for selected fistulas that drain directly onto the substance of the brain and where Endovascular occlusion requires the delivery of material remotely as it cannot be reached by a catheter or where there are useful connections to normal brain circulation that might be inadvertently occluded.

Successful and definitive treatment of a dural arteriovenous fistula relies on good multidisciplinary teamwork from the time of first investigating through to treating the fistula itself.