Cavernous located in the cerebral hemispheres have perhaps the most favourable prognosis. They should be distinguished from the deep white matter nuclei that lie beneath and share more in common with cavernous of the brainstem.

The two cerebral hemispheres are what most think of when picturing a brain. The hemispheres feature a complex folding pattern on their surface the plateaus of which are called gyri (singular.:gyrus) and the valleys are called sulcii (singular: sulcus). The deepest valleys seperate the various lobes of the hemisphere- frontal, temporal, parietal and occipital. These deep valleys are termed fissures and there are several important named fissures that, amongst other things, allow passage of important arteries through the brain.

The outermost layer of the hemisphere, visible at the surface, is the cortex. Cortex is made up of predominanlty the cell bodies of nerve cells and is sometimes termed the grey matter becuase it takes on a grey-ish hue after fixation in anatomical preparations. In life it is much closer to a cream or eggshell colour. Beneath the cortex lies the white matter made up of the axons which emerge from the nerve cell bodies. These are the "fibreoptic cables" that transmit information throughout the nervous system. These information highways are coated in a protein called myelin which gives it a whiter colour. Bundles of these nerve axons connecting one group of nerve cell bodies to another are called tracts. Like a system of roads some are large and design to transmit their traffic rapidly while others are smaller and care specialised traffic at a slower rate.

Cavernomas may develop in either white or grey matter. Cavernomas which develop in the cortex (grey matter) are those likely to cause seizures. It is believed that the leakage of blood products into the brain is central to seizures developing.Iron, an important component of the blood's haemoglobin, is very toxic to nerve cells and specialist cells engulf it so it may be stored in a less-toxic form called haemosiderin. Haemosiderin is visible as the characteristic dark ring around the cavernoma on T2 sequence MR scans.
‍

Lobar cavernomas often lend themselves to relatively safe microsurgical removal. The surgery is usually minimally invasive making use of advanced image guidance techniques. Increasingly we have made use of a new technology called an exoscope which is a type of high definition telescope in place of the operating microscope. When combined with minimally invascive tubular retraction systems designed to minimise disturbance of nearby tracts subcortical cavernomas may be completely removed with very little disturbace to the nearby brain. 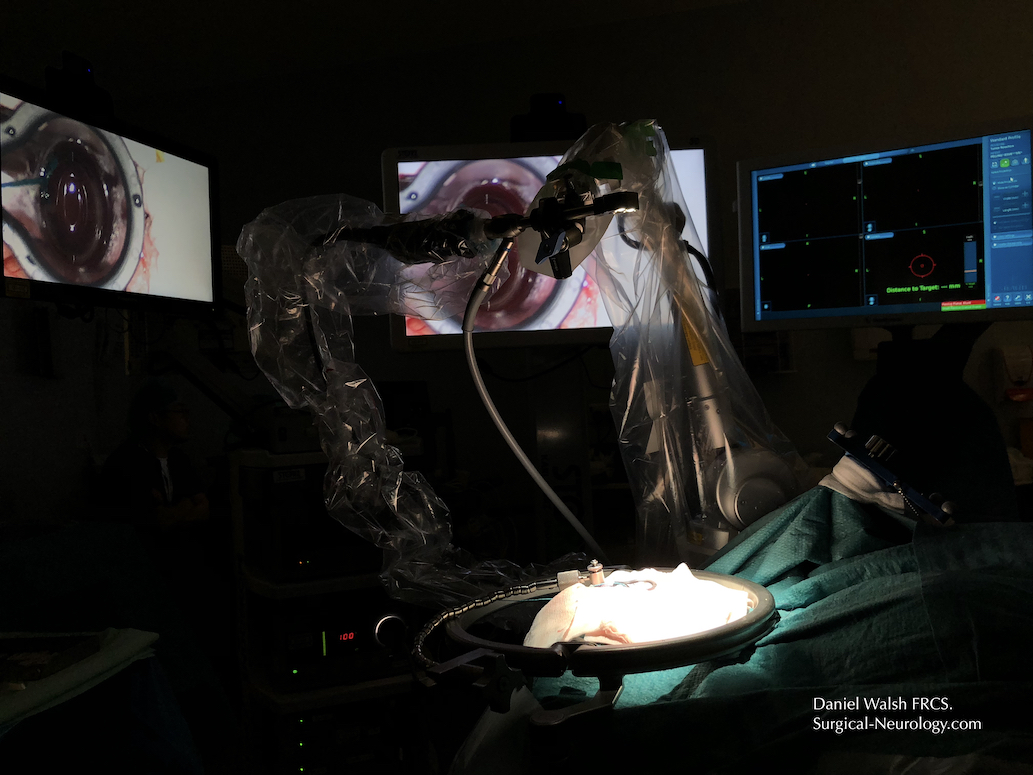 Surgery will usually be considered if a lobar cavernoma had bled causing symptoms. It is estimated that the risk of suffering a first haemorrhage is about 0.5% per annum. The risk of a subsequent haemorrhage appears to be elevated at approximately 20% for the subsequent two years before settling back down to the baseline figure. Having said that it is relatively rare that bleeding from a lobar cavernoma would cause serious, permanent disablement. Removal may also be considered if the cavernoma has presented with a new seizure disorder. As a rule-of-thumb refactory epilepsy is considered to be present when two or more medications are required for more than two years yet seizures still occur. In such a situation the removal of cavernoma may make the medical control of the seizure disorder easier. The highest chance of rendering a patient seizure-free is when the cavernoma can be removed within a few months of the seizures beginning. There is increasingly a view that long-term seizure control in younger people will be improved by earlier removal of a cavernoma when reasonably safe and feasible