Cavernous Malformations or Cavernomas are lesions comprising of abnormal blood vessels which lack the usual muscle and elastic tissue in their walls. They can occur anywhere in the nervous system and may be multiple. Although a cause of epilepsy and disability many remain clinically silent or behave in a relatively benign manner. 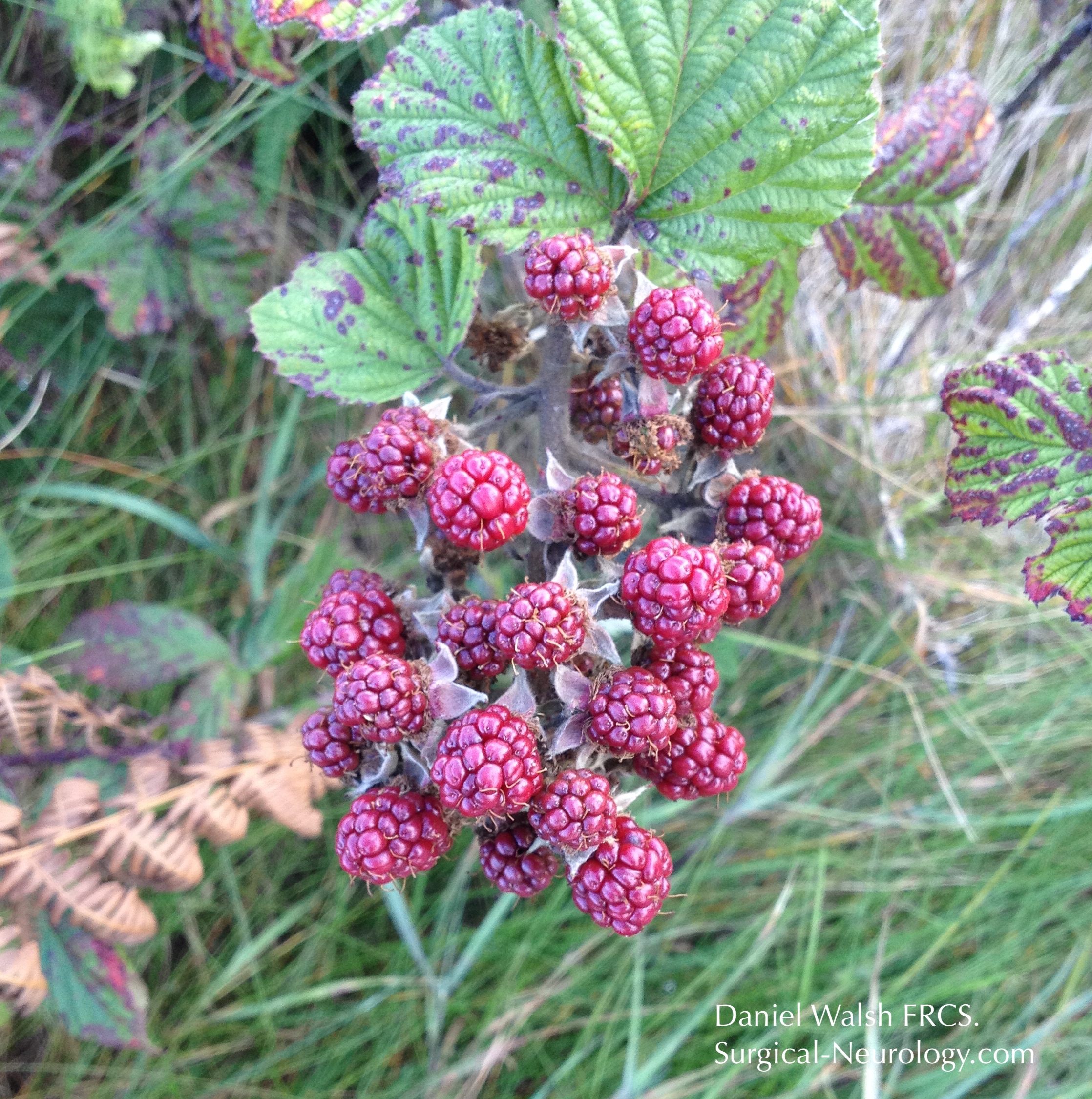 The blood contained within cavernous malformations is under very little pressure and they do not attract a very large blood supply themselves. In life their appearence is frequently compared with that of rasberries, blackberries or mulberries. They range in size from millimetres to several centimetres. It is estimated that about 1 in 600 persons harbour a cavernoma although many have no symptoms as a result.

Cavernomas occasionally associated with malformations of the veins in the brain where they are located. These malformations are called Developmental Venous Anomalies (DVA). DVAs are considered normal variants and they drain blood from the brain to the normal circulation. They are frequently mistaken for arteriovenous shunts. DVAs are carefully preserved when removing a cavernoma to prevent stroke in the surrounding brain.

With the increased availability of MR scanning it has been recognised that cavernomas are relatively common being found in between 1 in 200 and 1 in 600 MR scans. It has also been recognised that cavernomas may develop de-novo and that they become visible on MR images when blood leaks from them staining the brain or spinal cord.Cavernoma are best seen on MR scans. Certain specialised MR scan sequences (Gradient echo imaging, T2*-Susceptibility weighted imaging) which are particularly sensitive for blood-breakdown products in the brain increase the chances of detecting small cavernomas. Cavernomas which have not bled overtly may appear as relatively high density lesions on CT scan. Sometimes calcification can be detected within them. They are not visible on angiography although assosciated developmental venous anomalies may be demonstrated.
‍

What is the Risk of Bleeding?

This is a more complicated question than it first appears. Firstly one must be clear what precisely one means by "bleeding".

The egress of small amounts of blood from a cavernoma is characteristic of their development and does not always result in symptoms. Furthermore symptoms that are difficult to otherwise explain are sometimes attributed to the leakage of such small volumes of blood that it may not be evident on imaging.

Such "microhaemorrhage" is a plausible explanation for brainstem symptoms occurring int he presence of a brainstem cavernoma but it is more difficult to relate to less-specific symptoms (e.g. a bitemporal headache). Occasionally there will be overt bleeding from a cavernoma which damages the surrounding nervous tissue and results n stroke. When reading the medical literature on the topic it is not always clear what authors mean by "bleeding" and it is not neccesarily the casethat these different types of bleeding should be regarded as equivalent in terms of the danger to a patient.

Moreover the risk of overt bleeding appears to be influenced by the location of the AVM and whether there has been bleeding previously. It may also be the case that certain genetic alterations impose an elevated risk for bleeding. The meta-analysis conducted by Horne et al.1 suggested that the five-year risk of bleeding for a cavernoma other than in the brain stem was 3·8% (95% Confidence Interval 2·1–5·5). Brainstem cavernous. If they had presented with intracranial bleeding of a focal neurological deficit (e.g. a facial weakness or limb weakness) that five-year risk was 18·4% (95% 13·3–23·5).

The majority of cavernomas are isolated lesions without a known genetic cause. On occasion the cavernoma is the result of a gene mutation. In these cases multiple cavernomas are usually present. Three gene mutations have been identified: CCM1(KRT1), CCM2 and CCM3(PDCD10) but there are cases of inherited cavernoma within families where none of these mutations can be identified suggesting that other mutations remain to be discovered. Also there are reports of cavernomas developing in the context of other genetic conditions e.g. Cowden's Syndrome.

If only a single lesion is visible on imaging it is improbable that it is linked to the gene mutations described above. Whether any given mutation confers particular characteristics to the cavernoma is still being explored e.g. are some gene mutations assosciated with a higher risk of haemorhage?

The currently recognised genetic forms of cavernoma exhibit an autosomal dominant pattern of inheritence; that is to say that a child with one parent carring the gene mutation has 50% chance of inheriting it. An individual with the faulty gene may not have a detectable cavernoma themselves but has the same chance as an affected individual of passing the gene mutation on.Cavernoma has been described in the wake of radiotherapy to the brain although there is no evidence these malformations behave in a more aggressive way. Cavernomas that develop after radiation therapy may do so many years, even decades, after the treatment was originally given.

Cavernoma has been described developing in the wake of radiotherapy to the brain although there is no evidence these malformations behave in a more aggressive way. Cavernomas that develop after radiation therapy may do so many years, even decades, after the treatment was originally given.
‍

Microsurgical removal is the best established treatment for cavernoma although the optimal indications for surgery remain uncertain. Most neurosurgeons will wait on one if not two clinical events related to bleeding before recommending removal. It may be there are particular presentations that might benefit from earlier surgery where it is safe and feasible e.g. early after the onset of a seizure disorder related to a cavernoma.

Stereotactic radiosurgery has been advocated as an alternative treatment with the potential to reduce the rebreeding risk from cavernoma by about three years post treatment. There are no high-quality, adequately powered comparative studies to date to support this assertion and most evidence comes from retrospective institutional series.

A randomised study of treatments for symptomatic cavernoma began its pilot phase in the United Kingdom- The CARE study,

There are currently no proven medical therapies that modify the behaviour of cavernomas. Various drugs have been proposed as potential therapies and some trials are underway e.g. statins or the beta blocker, propranolol.

For more information about specific types of cavernoma please use the navigation bar at the top of this page.
‍