The brainstem and deep nuclei contain tissue that sub-serves vital functions including control of the heartbeat, blood pressure and respiration amongst many others. Lesions in these areas may result in progressive and profound disability.

The brainstem serves multiple vital functions including the regulation of conciousness, the rhythm of breathing and the heartbeat. Almost all the information transmitted to and from the rest of the body pass via the brainstem and it serves as an important relay station along the route. It consists of three parts- the midbrain, the pons and the medulla oblongata. Ten pairs of cranial nerves emerge from the brainstem controlling, amongst other functions, eye movements, facial sensation, hearing, balance, taste and swallowing. 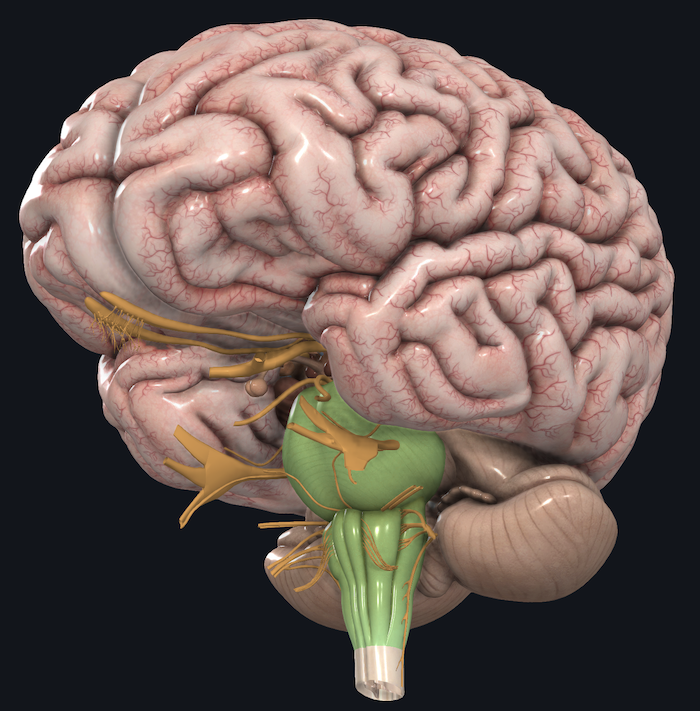 The midbrain is directly connected to the cerebral hemispheres by two promontories its superior aspect- the cerebal peduncles. Through the peduncles flow the nerve fibress transmitting informtion to and from the higher centres.

The pons was so named by Italian anatomist Costanzo Varolio because when viewed in axial cross section (e.g. looking up from the feet as one would on a CT or axial MR scan) it's shape resembles a Venetian bridge (Latin: pons). The pons is an important relay station to the cerebllum which controls muscle co-ordination and attaches to the back of the brainstem via three cerebellar peduncles.‍

Finally before the brainstem turns into the spinal cord is found the medullar oblongata usually referred to as simply the medulla. Within the medulla are groups of cell nucleii controlling involuntary activities such as breathing, the heartbeat and the muscle tone in the walls of blood vessels.
‍

Deep nuclei are collections of nerve cell bodies adjacent to the brainstem. The basal ganglia are a group of subcortical nucelii that contribute to a wide variety of functions including voluntary movements, emotional reactions and many others. Not all of their functions are completely understood. They are intimately related to the limbic system (white matter structures important in laying down memory and modulating emotion), the corticospinal tracts(initiating volunary movements) and the thalamii and spinothalamic tracts (relaying sensation to the higher centres). Although anatomically not part of the brainstem, these deep nucleei are equally as susceptible to injury by small amounts of bleeding from a therapeutic perspective pose similar challenges.There are deep nucelii in the cerebellum as well and lesions here may affect not only co-ordination of movement but also mood, emotion and speech

There are deep nucelii in the cerebellum as well and lesions here may affect not only co-ordination of movement but also mood, emotion and speech.

Treatment of Deep and Brainstem Cavernoma

Approaching lesions in these areas is difficult given the density and importance of functional neurological tissue surrounding the cavernoma. The brainstem is accessible by a variety of craniotomies the optimal determined by the anatomy related to the individual cavernoma. Neurophysiological mapping and monitoring of brainstem function is utilised to maximise safety and image guidance is necessary to determine the optimal trajectory of approach given the narrow surgical corridors imposed. In general if the cavernoma presents itself to the brain surface that will be the safest route by which to remove it. 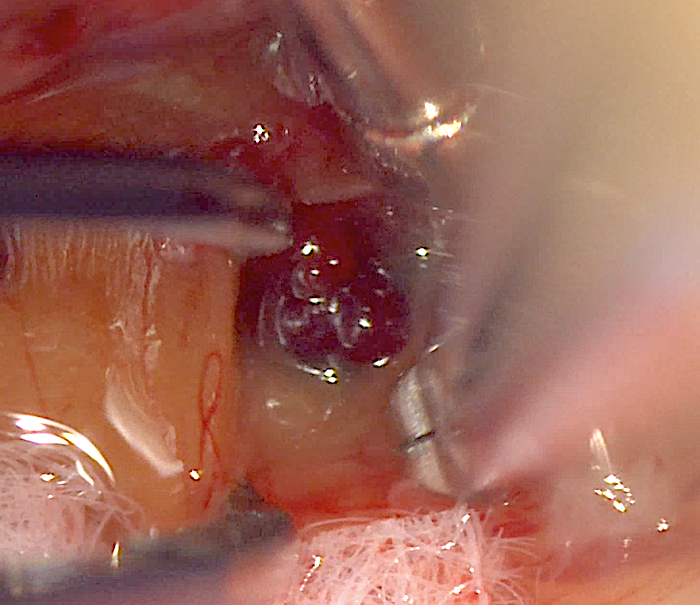 The image to the right shows the characteristic "berry"-like appearance of a cavernoma located , in this case, in the Pons of the brainstem.

Given the technical challenges reaching cavernomas in these locations radiosurgery has been investigated as an alternative treatment to surgical removal. Early attempts at treatment were dogged by complications possible becuase the radiation doses prescribed were more appropriate to the more metabolically active cancers that had previously been the radiosurgeons therpeutic target. The topic has been revisited for cavernomas deemed "inoperable" using lower radiation prescriptions. This has significantly reduced the complications of treatment although work remains to be done establish radiosurgery's efficacy in reducing the long-term risk of bleeding.

A decision to intervene on deep cavernomas is a very nuanced one and your neurosurgeon will discuss the pros- and cons- of such a decision in detail.