Arteriovenous Malformations of the Brain

Arteries are thick-walled blood vessels designed to carry oxygen, bound to the red blood cells, to parts of the body where it will be used to fuel the activities of the organ's cells. Capillaries are tiny intermediary blood vessels that typically from the final path through which oxygen is delivered to tissues before the blood returns to the veins. Once that oxygen has been unloaded from the red cells the blood is carried back to the lungs in thinner blood vessels called veins so that it may collect more blood and begin the return jouney. 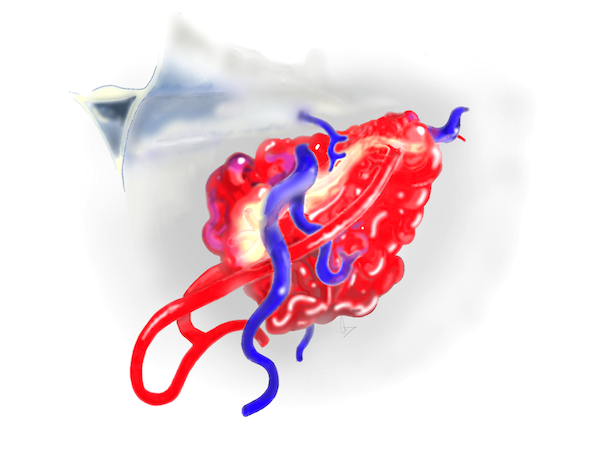 An arteriovenous malformation (AVM) forms in the brain when an abnormal connection develops between its arteries and the veins. Oxygen-laden blood bypasses it intended destination and passes through a tangle of abnormal vessels called a nidus (from the latin for "nest"). The arteries and veins connected to the malformation often  becom larger and more tortuous in response to this greatly increased workload.

AVM are a cause of stroke as a result of bleeding in a minority of those who harbour them but such strokes may result in death 10% of the time and produce disability in 20-40% of cases. However for most they may remain. unnoticed, throughout a lifetime.
‍

Arteriovenous malformations of the brain (AVM) are found in about 10 to 18 per 100000 people. Many remain undiscovered causing no symptoms throughout a person's life. They develop early in childhood or are present at the time of birth.

The high rate of blood-flow through an AVM places stresses on the vessels which may eventually result in bleeding. Aneurysms may develop on the arteries, veins or within the nidus which represent particularly weak area prone to haemorrhage. An AVM may develop in many parts of the body but in the nervous system are of particular concern because of the damage that bleeding within the brain or spinal cord may cause. Such AVMs are sometimes termed pial AVMs.
‍

What Is The Risk of Bleeding?

Estimating the risk of bleeding is not straightforward. Assuming the prevalence of the condition described above is correct there is also the fact that AVMs form a very varied family. Some are large while others are small. They may have many or few arteries feeding blood to them. There may be many veins draining the malformation while others rely on a single vein. Consequently the stresses placed on these vessels are different from case to case and therefore the risk of bleeding probably differs, at least a little, from one malformation and individual to the next.

The best quality data at present suggest the risk of a first-ever haemorrhage from an AVM is about 1.3% per year. The risk of subsequent haemorrhages then increase, particularly in the ensuing 12 months before settling back to an elevated baseline of about 4.8% per year.
‍

Why Do Brain AVMs Develop?

It was believed that AVMs formed in the developing foetus or in the period immediately after birth. However there are now well-documented cases where the AVM clearly developed later in childhood. This tells us that the development of an AVM can be a dynamic process.
‍

In 2018 Nikolayev and colleagues reported that they had identified somatic mutations of the KRAS gene in sporadic brain AVMs. A somatic mutation is one which occurs only in the tissue affected by the disease and therefore is not passed to the next generation necessarily.

KRAS mutations were already well recognised in several cancers e.g. lung, pancreas and colorectal carcoinoma a molecular signalling pathway called the RAS/MAPK pathway affected. These changes to that pathway seem to affect how the cells in the inner wall of the blood vessel (endothelial cells) develop and move but not how they proliferate. Therefore the growth of AVMs seems to arrest early in life.There is a great deal yet to be learned about why AVMs develop in tissues and through understanding these processes it is hoped new treatments may emerge.
‍

Most AVMs encountered in clinical practice are isolated lesions but there are uncommon conditions where an aberrent gene programs AVMs and other vascular malformations to develop throughout life. An example of such a condition is Hereditary Haemorrhagic Telangectasia (HHT).

This is a collection of conditions characterised by the development of multiple AVMs in various locations including the brain, skin, eyes, mucus membranes and lungs. Telangectasia are small bright red vascular malformations in the skin. It is thought to affect between 0.1-0.2% of the population. An understanding of the HHT gene mutation provided the prototype for a deeper understanding of how all vascular malformations develop. In particular it shed light on the importance of a protein called Endoglin and its vital role in new blood vessel development.

There are several subtypes of HHT recognised:
HHT-1 is caused by a mutation of the ENG gene. Patients develop AVMs in the lung and in the brain.
‍HHT-2 is caused by a mutation of the ACVRLI gene. AVMs of the brain and lung develop but patients are affected later in life than in HHT-1.
‍HHT-3 is assosciated with more frequent involvment of the liver than types 1 and 2. The exact gene abnormality is not known but thought to be on chromosome 5. 30-79% of those with HHT3 also harbour one or more cavernoma.
‍HHT/Juvenile Polyposis Syndrome is the result of a mutation of the SMAD4 gene and results in a propensity to develop polyps in the gastrointestinal tract as well as AVMs. Such polyps are not found in HHT types 1-3.
‍

This is again a collective term for a group of related conditions, some of which have been recognised in isolation for a long time.

The human body develops in discrete sections called metameres. Vascular malformations of the head, neck and brain occur in this condition within the discrete metameres that make up the head and neck. A rare variety of spinal coloumn AVM ("juvenile" or "metameric" AVM) likely results from the same process ("SAMS"). This group of conditions may encompass the Sturge-Weber and Wyburn-Mason Syndromes.

CAMS-1 sees AVMs develop in the region of the nose, the frontal part of the brain and the hypothalamus.
‍CAMS-2 is characterised by AVMs of the mid-face, retina, visual pathways within the brain, the thalamus and the occipital lobes.
‍CAMS-3 affects the hindmost parts of the brain (pons, cerebellum) and the jaw.
‍

CM-AVM is a condition first described in 2003. It results from a mutation of he RASA1 gene. RASA1 provides instructions for making a protein called p120-RasGAP. This protein helps regulate a signalling pathway from a cells nucleus to the elements of the cell outside the nucleus. This is the RAS/MAPK signaling pathway and it is involved with several important cell functions.

In the CM-AVM syndromes, AVMs develop on the face, arms and legs but may also be found in muscle, bone, brain and spinal cord. Sometimes only malformations of the capillaries develop. . In others both capillary malformations and arteriovenous malformations co-exist.Usually an individual affected by CM-AVM will have inherited the condition from one affected parent (autosomal dominant inheritence).

It is possible, however, for the condition to arise with no previous family history of the disease as a result of a new gene mutation. The condition affects approximately 1:100000 persons of northern european descent.
‍